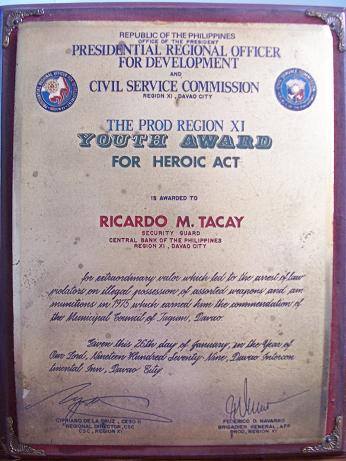 In 1975, Ricardo M. Tacay had shown true grit as a youthful policeman of Tagum, Davao del Norte. He saw real action against a gun-running syndicate headed by a Davao del Sur councilor. Due to the importance of the element of surprise, the 3-man assault team available at the time was formed upon receipt of information.

Upon reaching their objective, however, they realized that they were outnumbered and outgunned by 4 to 3 with only an M16 armalite rifle and a revolver each. There was no way to withdraw without being noticed. Sensing a “damn if you do, damn if you don’t” situation, Tacay led the sneak attack while their objects were having lunch inside the nipa hut that served as a safe-house.

Surprised and panicked after hearing the order for surrender, the gun-runners jumped out of the window and fired their weapons while trying to scamper away. The gun-battle ensued and they opted to surrender when one was mortally wounded. Twelve pieces of assorted firearms and ammunitions were confiscated and brought to the police headquarters. The next day the three policemen Ric Tacay, Vicente Madjos & Edwin Buena were honored by the Municipal Council of Tagum in a fitting ceremony.

But prior to the incident, when Tacay was still on-the-job training (0JT) in the police force in 1973, he fought single-handedly two notorious robbers in Tagum,who were about to rob the Christ the King Cathedral Convent. Acting on information,Police Chief Teodorico Seno dispatched immediately a seven-man “Special Unit” headed by Police Sgt. Eugenio Budiongan to arrest them, who were later identified as Manuel Azarcon of Surigao City and Boy Rodriguez of Tacloban City. But when the police team (including Tacay on OJT) were approaching behind the convent, therobbers fled away. The chase ensued thru barbwire fences towards Rizal Street where Tacay was living and very familiar with the terrain. There was a brief exchange of fire. But since most policemen were old and pot-bellied, they were left behind and Tacay, who was only 23 years old, pursued with the chase until he caught up Boy Rodriguez behind the residential houses.

During the hand-to-hand combat that followed, Rodriguez fell unconscious with a bloody face. Azarcon, who had emptied his Cal. 22 Magnum, climb on top of the houses when cornered by few neighbors. Tacay left the fallen Rodriguez to catch up with Azarcon atop the houses, and another fistfight ensued. The people below saw the robber fell from the rooftop after absorbing a roundhouse kick to the face, but managed to survive with a fractured nose-bridge and a few broken limbs.

In 1979, during the “Search For Most Outstanding Government Employees in Region XI” by the Office of the President and the Civil Commission, Tacay, who had already transferred at the Central Bank of the Philippines in Davao City as a Security Officer, was chosen among others to receive the “Youth Award for Heroic Act” by the PROD and CSC Selection Board based on his accomplishments while still a policeman and as a member of the R.P. Karatedo Team in the 4th World Karatedo Championship held on December 3-4, 1977 in Tokyo, Japan. He was honored with a plaque, medal and a certificate in the grand ceremony held at the Davao Insular Hotel Inter- continental Inn in Davao City on January 26, 1979 attended by the Provincial Governors, the City and Municipal Mayors, Regional Directors and top military officials in Region XI.

In January 26, 1981 the Office of the President through the Presidential Officer for Development and the Civil Service Commission XI honored Tacay again, with a “Certificate of Merit for Outstanding Performance of Official Duties and Dedication to Public Service”, during the grand ceremony held at the Venees Hotel Gardenroom in Davao City, attended by the same top government and military officials in Region XI.

He extended his public service “beyond the call of duty”. He fought a notorious hold-up criminal who had been victimizing students of the Davao City High School. He caught the criminal red-handed while taking money from a student, under the threat of death by a fan knife, that happened outside the perimeter post of the Central Bank he was guarding at the time. He had also conducted “free-karate-training-program” to several barangay tanod units and out-of-school-youth in Davao City.

This history of valor is just one among the unwritten and unpublished heroic deeds of a common man, who has made a niche for himself in the world of karatedo and in the service of our country and humanity, worthy for others in the government service to emulate.